STAMFORD, CT – Mayor David Martin held a swearing-in ceremony for Police Chief Timothy J. Shaw. Chief Shaw served in Stamford’s Police Department from 1988 to 2015 and rose through the ranks from Police Officer to Assistant Chief over his 28-year career at the department.

“Chief Shaw has a deep understanding of our community, as well as experience in other departments to help inform how Stamford’s Police Department can become even better,” said Mayor David Martin. “This is a difficult time for everyone in our community, but Stamford is fortunate to have an incredible police force and excellent leadership to keep us safe.”

“I left Stamford believing it had the greatest police department in the country, I am honored to return to where I call home and serve as Police Chief,” said Chief Shaw. “I hope to follow in the footsteps of the incredible chiefs who led this department before me. I’m here for the community. At a later time, I’ll have the opportunity to meet with Stamford’s community. For right now please stay home, stay safe, and I thank you for this honor.”

Due to the ongoing COVID-19 pandemic, Chief Shaw’s swearing-in ceremony was limited to immediate family and department personnel. The ceremony was streamed live to Stamford’s official Facebook page. The City intends to host events for the public to meet Chief Shaw when possible.

Assistant Chief Thomas Wuennemann has served as acting Police Chief since July 2019 in the interim between Chief Fontneau’s retirement and Chief Shaw’s appointment. Mayor Martin recognized Chief Wuennemann for his service to the department.

“One of Stamford Police Department’s greatest strengths are the dedicated individuals throughout the organization. I am very grateful to Chief Wuennemann for stepping up and providing excellent leadership while confronting many significant challenges to our police force during this difficult time for our community,” said Mayor Martin. 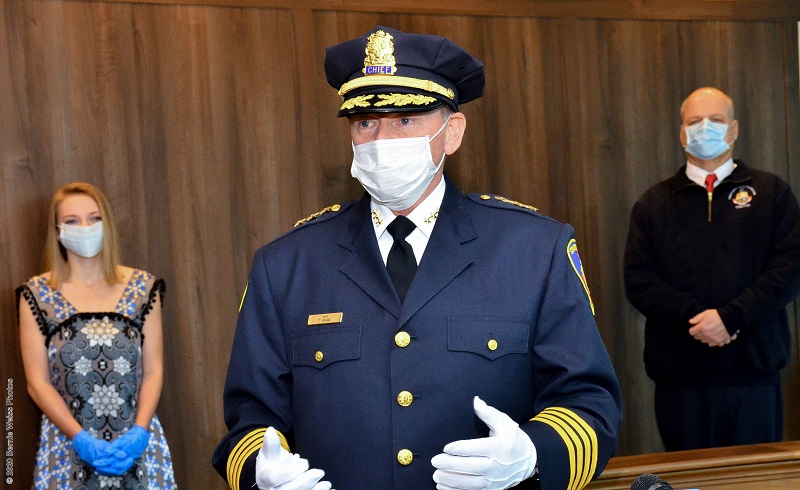 Chief Shaw has been recognized by the Connecticut State Police and Connecticut Police Commissioners for his work as Easton’s Police Chief. During his 28-year career at Stamford’s Police Department, Chief Shaw has repeatedly shown a willingness to tackle difficult challenges, including forming a unit to address high crime rates during peak hours, developing a comprehensive strategic plan for responding to crime “hot spots,” and meeting with community leaders for feedback on implementation of new initiatives. Throughout his career, Chief Shaw has coordinated with federal organizations including the FBI, DEA, ATF, and U.S. Marshall’s Office.

“Chief Shaw is an impressive law enforcement professional with a wealth of knowledge and diverse experience,” said Director of Public Safety Ted Jankowski. “He understands the challenges confronting the department and has demonstrated the ability to respectfully deal with all people in the community. Chief Shaw is a family man with moral fortitude who has inherited an exceptional department with extremely dedicated men and women. I expect great things under his leadership.”

Chief Shaw’s career in law enforcement began in 1988 as a police officer for Stamford’s Police Department. Shaw began in patrol and quickly became an investigator for the Statewide Narcotics Task Force in 1990 where he worked as an undercover officer within Fairfield County to infiltrate organizations in coordination with local, state, and federal partners. As a direct result of Shaw’s undercover work, numerous narcotics, firearms, and monies were seized from illegal operations. Shaw’s expertise for narcotics investigations continued throughout the rest of his career. He later served as Sergeant and Lieutenant within the Narcotics Division prior to becoming Assistant Chief.

Chief Shaw recognized his family for their support throughout his career in law enforcement.

“Without the support of my family, my son, my daughter, my wife — who every day support every decision I make — I believe they give me the support to be the person I need to be,” said Chief Shaw.

The City that Helps Winter 2021
Read more publications on Calaméo